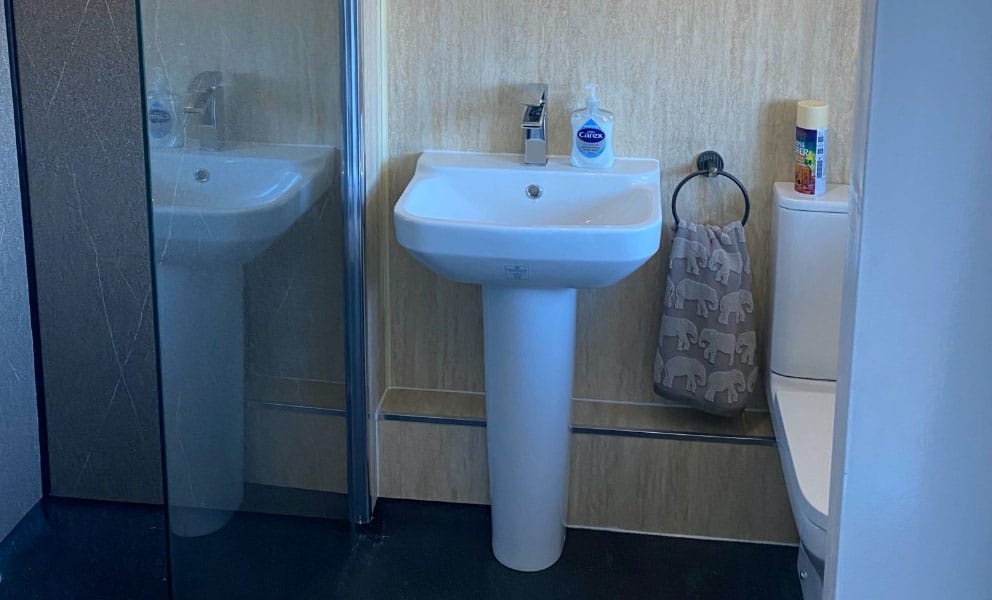 Decorating a bathroom is rarely an easy task – particularly if you’ve decided to install ceramic tiles for your shower. Sure, everyone can agree that tiles are a safe option in terms of style. But the general consensus around tiles is that they’re also an absolute pain to maintain. From lengthy and expensive installations to hours scrubbing grout joins to get all the mould out, ceramic tiles come with their fair share of headaches.

Given how high-maintenance ceramic tile is, it’s no wonder that many homeowners have decided to go with shower wall panels instead. Why? It’s simple. To start with, wall panels are extremely easy to install – so much so that they can be fitted directly on top of existing tiles. And because they barely require grouting, shower wall panels can easily fend off moisture and mould.

You might have also heard that shower wall panels are completely waterproof. But does that mean they’re completely leak-proof? Let’s find out…

Shower wall panels have two main advantages over tiles – they last a lot longer and they don’t require as much maintenance. That’s because, unlike tiles, shower panels don’t have grout joins that absorb moisture. So, in theory, your shower wall panel shouldn’t leak. Any high-quality shower panel should be completely non-porous and repel all water droplets coming toward it.

But sometimes things aren’t what they seem on paper. As shower wall panels take over the bathroom decoration sector, some people have complained about water leaking from their panels. Why is this happening? The most plausible answer is that it’s a combination of several factors – from faulty installations to subpar material. Let’s dig deeper into the matter…

Why are my shower wall panels leaking?

After exhaustive research, we have identified the two most common causes of leaks in shower wall panels.

It’s true that shower wall panels are a lot easier to install than tiles. In fact, many homeowners install their panels themselves without asking a professional installer for help. However, that doesn’t mean that you can fit your shower wall panels however you like. As with any product, you should always strictly follow the manufacturer’s instructions.

Most shower wall panels in the market are tongue and groove – meaning they fit together like jigsaw pieces without needing to be grouting. Unfortunately, certain installers believe that grouting bathroom panels will make them more resilient. In reality, this will only make them more prone to leaking.

As it always happens with booming industries, many companies are jumping on the shower panel bandwagon with no prior experience in bathroom decoration. A quick online search reveals that there are plenty of retailers selling shower panels without actually specifying the materials that they are made of. Suffice to say, this is a big red flag.

A quality shower panel should always be made from polyvinyl chloride (PVC). One of the most widely used polymers in the world, PVC is the material that grants shower panels their waterproof and insulating qualities. Unfortunately, some manufacturers save money by using PVC replicas instead of the real thing. In all fairness, you might not notice the difference with some other products. But PVC alternatives are a recipe for disaster for a shower panel whose main goal is to fend off water.

So far, we’ve seen why certain shower wall panels can’t actually repel water. Now, it’s time for some constructive advice – this is how you can make sure that your shower panels never leak.

How to make sure that shower panels don’t leak

Remember that the biggest selling point of shower wall panels is their convenience. If your shower panel is giving you a headache, it’s very likely that something has gone wrong somewhere along the way. But don’t worry if this is the case. We’re here to help with a simple, three-step guide that will help you ensure that your shower panels never leak.

It can be tempting to favour style over substance and choose shower panels that you like the look of, even if they’re not PVC.  But let’s make this clear. If your shower wall panels aren’t PVC, you might as well put some old newspaper over your bathroom walls and pray that it doesn’t leak.

When it comes to choosing the material for your wall panels, always go for 100% PVC – no substitutes, no replicas, no 99%. And if style is what you’re after, you’ll be happy to learn that PVC shower panels now come in a wide range of designs – from tile-like marble effect to industrial copper effect.

This is by far the most common mistake made by homeowners dipping their toes into the world of bathroom wall panels. Because they’re used to grouting tiles, they’ll also add a little bit of grout to their shower panels believing this will make them more water-resistant. Nothing could be further from the truth. Because it picks up moisture and debris, grout is actually the cause of most water leaks that originate in bathroom walls.

But be careful. Some PVC shower panels do actually require minimal grouting. If in doubt, just follow the manufacturer’s instructions and you’ll always be on the safe side.

3.    The easiest the installation, the better the panels

There’s a reason why it’s highly recommended that you learn how to install your shower panels yourself even if you can afford to pay for an installer. And that reason is that they are extremely easy to install. So, if you have chosen a shower panel that only requires a couple of additional materials, you’re on the right path – it generally means that it’s high-quality.

These days, many retailers sell their shower panels as part of a kit including all the materials you need to fit them. If you can, get your hands on one of these. It will ensure that you make no mistakes with the installation, as you won’t be wondering whether you need any additional material.

Looking for some high-quality shower wall panels to redecorate your bathroom? At Igloo Surfaces, we stock PVC shower wall panels in every imaginable style. And because they’re all completely waterproof and easy to install, you’ll never have to deal with a leak. Want to find out more about our range of shower panels? All you need to do is call us on 01709 329117 or email [email protected].

What Size Are PVC Wall Panels?
Are Bathroom Wall Panels Waterproof?
What Kind of Panelling Can Be Used in a Bathroom?